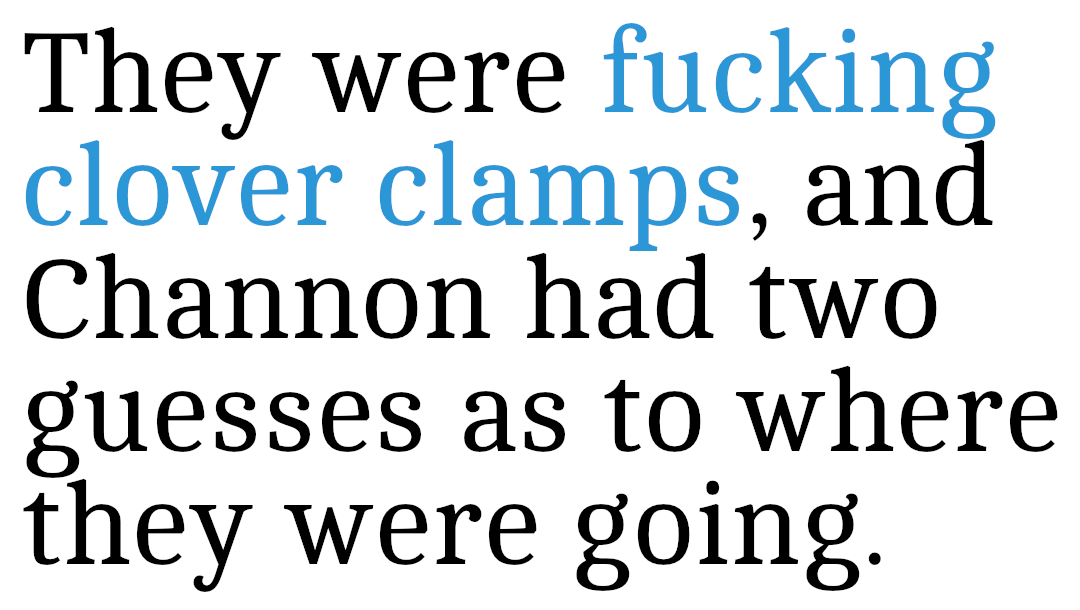 I cut this from Daddy Issues because poor Channon was in enough distress and didn’t need this added to the rest of it. (Despite how much Jack enjoys watching him suffer.)

Cut from Daddy Issues (His Boy Next Door #39)

Jack folded his arms, eyeing Channon hungrily. “You look wonderful like that. There’s something missing, though.” He took a small black bag out of his pocket and tipped the contents into his hand. Channon made an involuntary noise of protest. Jack smiled. “What do you think? Do you need these?”

They were fucking clover clamps, and Channon had two guesses where they were going. Jack had threatened to clamp his balls before, but since they were currently under quite a lot of pressure, Channon thought that was probably out. Nipples if he was lucky. If not…God, would Jack put them on his cock?

Channon licked his lips. He could say no. He could. What would happen then?

“Channon, do I have to ask for a color?”

Channon shook his head, and winced at the tiny increase of tension on his balls. “No, Sir. I…I don’t want them. But.”

Jack was watching him avidly. “But what?”

“But it doesn’t matter what I want,” Channon blurted out, all in a rush, because he knew it was the only real answer he could give.

“That’s right,” Jack said fondly. He trailed a clamp over Channon’s chest, brushing his nipples with it. “Where do you think these are going?”

Was it a trick question? “My nipples, Sir?”

“You’d think so.” Jack ran the clamps across Channon’s chest to the hollow of his armpit. Channon tried not to flinch away. “But then where would the rest of them go?” He dipped a hand into his pocket and held up four more clamps, six in total, a menacing, glittering, matching set.

Channon didn’t have eight of anything, let alone nipples. He tried to think of four more places for them, and came up blank, distracted perhaps by the ache in his balls.

“It’s all right,” Jack murmured. He was very close now,and Channon could smell the clean, familiar, masculine scent of his sweat. “I won’t punish you for not being able to guess.” He leaned in, his lips brushing Channon’s ear, and said, “They’re going in your armpits.”

For a moment, Channon didn’t believe him, then Jack took a firm hold of the flesh at the front of Channon’s left armpit, and attached a clamp.

To say that it hurt would leave no room for how much more each one hurt after that. And they did, each more than the last, three in a row along the forward edge of each armpit, two lines of hot pain. Channon fought not to squirm, tried to breathe through it. Jack was unhurried about it, stroking Channon with his fingers, stringing this out until Channon had lost all sense of time. It could have been minutes. It could have been an hour. All he knew for sure was that it hurt. Everything else was too much to process.

“Good boy,” Jack murmured. He kissed Channon’s shoulder, and then lower, down Channon’s chest to tongue his nipple. “There’s my good boy,” he said, teasing Channon with his teeth. Then he sucked that nipple into his mouth, and Channon groaned because he liked that, but with the agony of the clamps painting pain into his skin he felt conflicted, torn between the pleasure of one and the torture of the other. Jack licked and sucked, tugging the sensitive flesh with his teeth, and then abused the other nipple the same, his fingers slipping over Channon’s wet skin, tracing a path down. He ran his hand over Channon’s cock, over his balls stretched back and up, to where the rope bit in, constricting him painfully. Channon wobbled on his toes, and found this was bearable. He let his weight down a little, and the ache wasn’t too bad. He could handle it. He could do this.

“Getting used to it?” Jack asked. He smiled at Channon, a dark, knowing smile that made Channon wonder if he’d done something wrong. But he hadn’t, surely. “Need a little more, sweetheart?”

Channon wet his lip. Jack was going to make it worse, he knew that. He trusted Jack. God, why did he?

“I think you do,” Jack said, smiling like this was a gift.

What do you think? A bit much for our darling boy or just what he deserves?

If you haven’t picked up _Daddy Issues (His Boy Next Door #39)_ here’s your chance!

This site uses Akismet to reduce spam. Learn how your comment data is processed.